A public library and centre for women and children in Afghanistan

with HOLD, a Kabul/Farah based NGO

Farah is situated in Western Afghanistan, near the Iranian border, between Herat and Kandahar. It is one the rural regions that have been ignored by major aid agencies, with the notable exception of PRT which have been active in many fields.Population estimates vary through lack of official documentation and the sheer difficulty in undertaking any such research, but 200 000 inhabitants make up a conservative estimate.

This is a remote area indeed where women’s lives are extremely hard, to the point that self-immolation is a frequent occurrence [1]. The level of health and literacy is extremely low, infant and maternal mortality are very high [2]. This is a region crying out for help.

FemAid, a French charitable organisation, is the only non-Afghan charity involved in the Farah area.

For three years, we had been working on a library/early learning centre project.. We launched it in temporary premises, with the help of a local grass- roots women's association and PRT. Then in May 2009 , the project expanded to a fully-fledged women and children's centre. More than library it also houses various courses and counselling activities, run exclusively Afghan women, thereby becoming a true social centre in the midst of Farah.

Our target audience are young women and their children, that is to say most of the school-going population in a region where girls are married by the age fourteen to fifteen and have children immediately. It seemed to us pointless to enforce school education and literacy when no books were available afterwards. This project is primarily designed to help schools in their long-term mission.

In 2008, we bought a very large amount of Persian-language books in Kabul and then in 2009 another consignment of children's books, encyclopedias, reference books and toys in Mashad (Iran) for this library. Pashto and English-language books and teaching methods were also acquired in Kabul. The temporary library served as a revolving library for schools in the Farah province. School directors borrowed books on a regular basis for their school. We also bought 60 encyclopedias for 60 schools.

The early-learning centre is equally important in Afghanistan where children are perceived as incomplete adults and the specificity of childhood is denied.

Getting an independent centre started

FemAid has been involved in this project since its inception. There is no giving up. With our implementing partner HOLD, we decided to work on a structure that would be culturally, socially acceptable, even in these exceptionally difficult circumstances. Having all the local contacts (essential for such a project), this was feasible. PRT was very encouraging as well.

With HOLD, our implementing partner and sister association in Afghanistan, a grass-roots organisation,we decided to transfer the whole project and open a women’s centre, a place where young women feel comfortable to go with their children We rented a building, installed a family and guard and transferred the books and toys. All this has been successfully undertaken in the month of May 2009. Shelves, tables, chairs were built, carpets put down.

The library in the centre is the first of its kind; furthermore, girls have been attending massively school since the fall of the Taliban. There is a 8000-strong student population in the city. It is located near the nearby Mirman Nazoo girls' school. There are 3000 female pupils there, studying in shifts, many of them former refugees, of which half of them are married and many mothers (marriage takes place quite often at 13 or 14 if not before).

In October, the PRT generously donate a large office package which comprised furniture (including the oversized couches that are 'must' in any Afghan administration), computer, printer, paper. We can only hope that electricity lasts longer than three hours a day so that everyone can enjoy this equipment

A counsellng centre: for the moment,

Today in 2013 the Centre runs the following

Legal counseling and women’s rights, both constitutional and Q’uranic :

Some articles by Carol Mann linked to this project

Since the fall of the Taliban, an increasing number of children and young people have been attending school, more in fact than ever before as an effort has been made even in the remotest provinces to enrol students of every age. This is why classes are filled with pupils aged anywhere between seven and twenty, as young women are eager to get some kind of education. Even in distant villages, there has been a demand for schools. Furthermore an increasing number of children and adolescents have been returning to Afghanistan after many years abroad, forming the bulk of the 3. 5 million returnees that have been finding the way home since 2001. In exile as refugees, many had the opportunity to lean English and other foreign languages. Today there are no public libraries and those that exist have meagre resources and are attached to universities, principally Kabul university where there are rebuilding projects with US partner universities, therefore only available to students.

A convivial library, well equipped in books, learning material, films and music with a language laboratory for individual learning of languages is of of the utmost necessity. Literacy classes are useless if no appropriate reading material is provided. Furthermore, without libraries, it would be impossible to maintain any previous knowledge of foreign languages as well as learning new ones, as young people fluent in English and other languages have generally chosen to work for NGOs rather than go for poorly paid teaching.

Projects aimed at youth are vital in a country where the median age of the Afghan population is 17.5. This library is aimed at young students in primary and secondary schools and their teachers : because many girls learn to read at a comparatively late age, primary schools often bring together young boys and teenage girls. A special section is reserved to very young children who are usually cared for by their older sisters or young mothers : illustrated books and toys await them whilst their siblings use the other library facilities.

More than a library, this is a place for exchange and communication, study and active workshops, in collaborations with other efforts to build up a civil society.

In the future, through computers and Internet facilities, links with other schools and cultural youth groups worldwide could be established. This centre, situated in one of the key areas of Afghanistan could be at the centre of many cultural exchanges between young people and schools East and West.

From every point of view this is a pioneering project which will further Education for All and be of great help to the schools in the area.

Furthermore, for a society emerging from over a quarter of a century of war, a special area within the library with learning activities designed for young children will contribute to enrich perceptions of childhood generally. Half the pupils in the Mirman Nazoo are married and mothers, so the idea is that they could come to the library with their children. Playing as a learning activity for children does not exist, because the concept of childhood as a period of discovery, learning and development is inexistent. Just as in pre-Enlightenment Europe, a child is considered just an incomplete, immature non-sexual adult who has to train for future hardship, especially girls. An area devoted to an Early Learning Centre, with creative games and toys will certainly advance the cause of childhood here.

This project was the brainchild of FemAid, a registered charity in Paris and was helped by the ACA Gallery in Toronto which organizes and promotes art shows to support charitable causes.

Today the Afghan NGO, HOLD runs this project to which we continue to contribute

Why build a children's library in a war-torn country ?

On one level it seems self-defeating, pointless if Taliban are going to torch it. Should we stop at that ? The challenge is a far more vital one. The intensity of my first voyage to Farah in June 2006 reminded me of my initiatory trip to wartime Sarajevo in the summer of 1994, I had encountered, for the first time this particular mixture of despair and hope. With Azra, an amazing woman from the city who had reorganized the education system in her neighbourhood, we dreamt of rebuilding their school. In those days, the siege felt interminable and the return to a normal life seemed beyond the scope of imagination. But somehow it happened : together we created a small charity called ‘Enfants de Bosnie’ with the official patronage of UNESCO, the active help of the Council of Europe, the Swiss government, the Conseil régional de l’Île de France and the French contingent of UNPROFOR stationed in Sarajevo, the miracle occurred. School children all over the world participated with letters, drawings and fund raising. The Skender Kulenovic school in Dobrinja is the most beautiful in the Balkans- see www.os-sk.edu.ba/historijat.htm. In the middle of the siege, whilst the future of Bosnia was uncertain, we managed to register the school on the UNESCO Associated Schools project scheme which turned it into Bosnia’s famous school !

Likewise, the seemingly improbable library project remains emblematic of a future for the new generation of Afghans as well as our own kids. Their fates are intertwined : what affects women in Afghanistan ends up having consequences in our own world, as the rise of reactionary politics all over the world ominously demonstrates. Sharing literacy, literature, arts and games, a culture that is neither consumer nor religion orientated, creating a common set of references through positive dreams and social ideals may create bonds that wars and politics might have otherwise irretrievably destroyed. The fight goes on, for them, for us. And in our globalized society, your help will make a difference not just in Afghanistan, but in your own environment. 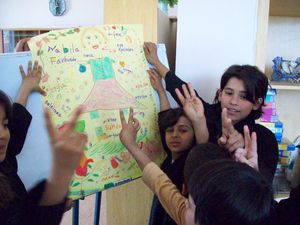 H
house maid services dubai
31/05/2021 10:39
Finally make certain the service you are considering is established. Ask to ascertain their industry license in addition to ask whether they have accountability insurance. This definitely will protect you in your chance there's some particular accident while they've been on your property. Also talk with the business enterprise about his or her's policies. It a wonderful idea to you can ask questions prefer, "What does an individual do considerably more than simply am dissatisfied with the degree of cleaning provided even on a particular explore? " not to mention "What will happen if your maid might be sick or on a break? " You too can look over the internet for cleaning service service review articles. Before a maid originates for at first chance create some written variety of things construct y should discover for convenient reference.
Répondre
D
deep cleaning dubai
28/02/2018 14:39
Your expert maids can provide deep clean-up service on every corner on the house/villa/bungalow. Basmh Clean-up staff is usually fully trained for taking extra health care while cleaning close to your house and likewise while handling fragile materials. For much more information, you can certainly contact your professional clean-up services or complete the question form presented here.
Répondre
O
OneClass
12/12/2015 16:28
We rented a building, installed a family and guard and transferred the books and toys.
Répondre
B
byteeducation.com
30/01/2015 06:29
Nice written!! I have been a big fan of your blogs. thanks
Répondre